Bacteria Refuge in a Shower System

We were engaged to monitor a large executive office building for a prestigious London client. The top executives of the company had the use of apartments within the building and these were fitted with luxury ensuite showers and baths.

Over the regular course of the monitoring one shower showed repeated positive legionella results at high levels. Repeated disinfections by the client of the supply, calorifier and shower systems using chlorine, chlorine dioxide and hydrogen peroxide with colloidal silver had no apparent effect.

Progressive replacement of components starting with the shower head and hose before replacing the calorifier and pipework had no effect on the counts. Eventually there was only one remaining original part of the system left – a fitting buried in the structure of a wall. This was dug out and replaced and the shower immediately had clear legionella sample results.

We were asked to investigate the fitting as it was removed and we found that the sealing washers were made of leather. Swab samples taken from these components were highly positive for legionella. This was originally installed in the 1970s when the block was constructed and once colonised supported a persistent growth of legionella. It was once a common practice for plumbers to punch their own washers and gaskets.

Components in building water systems should be WRAS approved (paragraph 2.33 HSG274 part 2) and although this approval is not directly for legionella control; it’s the best standard currently available.

As a result of our investigation the source of the legionella colonisation in this case was found and eliminated. Our client received evidence first hand of the reason to use WRAS approved materials and we helped them write this requirement into their legionella control policy. 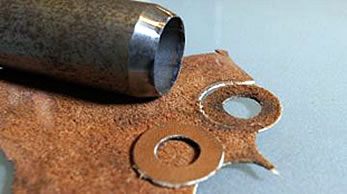